For the past couple of years, I stood on along the sidelines cheering my sister on as she continuously participated in half-marathon after half-marathon. Every time, I could not wrap my head around running 13.1 miles till one day I got bored with running the simple 5k distance and craved more mileage. Next thing I knew, I was registering for the Iron Girl Clearwater Half Marathon.

With the support of my family and close friends and 20 weeks to train, I began tackling mile by mile. Throughout the course of my training I completed two 10ks and a 15k. I went through a single pair of shoes and gained a GPS watch. I logged over 300 miles and closed in on close to 64 hours during my training runs. Can anyone say I had some serious devotion?

On Saturday, Court and I met up for the packet pickup and expo. The expo was held again at Coachman Park and it was a very warm day. I brought a bottle of water with me and wound up refilling it at the expo. As we walked around the expo, we made a stop at just about every vendor. When we made our stop at the Women’s Running Series, we chatted for several minutes with the young women and I left the tent registered for my second half, not even having ran my first!

As the day came to an end, I began to prep for the morning. Finalizing my running attire, making sure a full bottle of water and a banana were both packed, the nerves finally began to kick in, which made for a restless night of sleep.

The morning of the race we arrived an hour before the start. Immediately I hopped out of the car and began some light stretching before making our way over to the start area to meet up with my friend Barbara, who was also participating in the half. We walked around trying to loosen up our muscles before Barbara and I were asked to line up. Barbara has a much faster pace and so we split up to find our respected places with our pace groups.

Based off of past races I’ve found that I tend to start out much faster using up my fuel at the start. For this race I decided to start towards the back away from the pace groups.

The first mile was spent weaving in between runners to find my place among the pack, and not soon enough was the trek up the Memorial Causeway bridge. Having ran this bridge last year as part of the 5k I was familiar with it’s incline and proudly made my way up at a comfortable run pace, once I reached the top it was downhill from that point and I gained some serious time. The Sand Key bridge, however, was not a pleasant bridge to run but it was a great challenge to tackle.

Coming back over the Memorial Causeway, my legs were done but once I had passed the mile 12 marker I knew the finish line was in sight. As I came down the winding trail off the bridge I couldn’t help but look across the water at the Sand Key bridge and tear up a bit on my accomplishment. Upon passing the mile 13 marker I put out my last bit of energy and sprinted down the finish chute, coming in at 2:37:52. Wanting to finish between 2:30 and 2:45, I was thrilled with my time.

Last year I participated in the Iron Girl 5k. Upon crossing that finish line, I never imagined that a year later I would have registered and competed in the half marathon option! 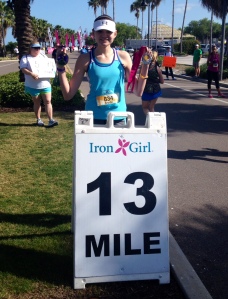