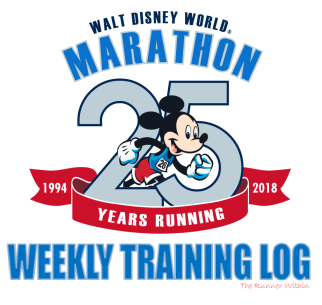 I hope everyone had a great holiday and a safe New Years! Let’s review what I’ve been up to these last two weeks.

Monday: Much needed rest day after the previous day’s 21 miles! Thankfully I was feeling really good, not too exhausted and hardly any aches or pains.

Tuesday: 4 miles were up for today but I just wasn’t feeling the run. Since the trainers were going to be out of town all next week and including this Friday, I shifted my focus on attending camp this week. Had to get those last few check-ins for the year 🙂

During today’s workout we had to reflect on some achievements for 2017, they didn’t have to be fitness related, but mine were:

Wednesday: Plan called for 8 miles but went to camp instead and logged a little under 2 miles. Not only was I focusing on getting to camp more this week but honestly I think after Sunday’s 21 miles I just kind of hit a wall with running and wanted a few days off from running.

Thursday: Today was suppose to be rest day but instead went to camp where we did a little over 2 miles worth of sprints and travel work.

Friday: Since there were no camps today with the trainers being out of town for the holiday, we move our weekday long run of 8 miles to this day. This run was good, thankful for the company to get me through the miles.

Sunday: Today we had our last double digit weekend long run to do. Kim and I sent out about 5:30a but heavy fog clouded our area and with a visibility of only a couple hundred feet we cut the run short by 6 miles.

Monday: The plan called for a rest day and I took it to spend time with family for the holiday.

Tuesday: We had 5 scheduled for today but instead swapped for our 10 which was on the books for tomorrow. Kim and I both had the day off from work so we felt it made more sense to do today so we weren’t rushed in the morning.

I used this run to play with my new toy, the Forerunner 235! My Forerunner10 is still in good working condition, except for it does after four hours of active use…which isn’t much help to me for the full.

Friday: 2 miles before camp with another 2.5 logged during camp.

Sunday’s miles brought my December mileage to a total of 128 miles, the most I’ve ever logged in a month!