Last Friday I participated in run number three of the St. Pete Beach Summer Series 5K. For those not familiar with the race, it is a 3-part 5K series that takes place June through August out on St. Pete Beach. I missed the first race this year, but you can read my recap of race number two here.

One thing that made this month’s race different than the past, was the fact that is was high tide. Typically with these runs, the runners run on the hard sand by the water. With the high tide we had to run higher up on the loose sand really giving my glutes a workout for half of the run.

Going into this race I had hopes of potentially placing in my age group. The only thing that had me doubting that was not the probability of having several girls in my age group but the weather. Unlike last race, it was sunny with very little cloud coverage. The temperature was in the high 80s and while the humidity wasn’t too high, the beach was well warmed up from the all day sunshine.

Most of my runs have been in the morning and are in a park with lots of shade coverage. This run was in direct sunlight for the full 3.1 miles. There was a nice breeze before the start and in parts of the first half of the race, but come the turn around back to the finish the breeze had disappeared.

The event organizers had everything coordinated so well that the horn sounded promptly at 7:00pm and we were off. Many families were out enjoying the beautiful Florida sunset at this time so all of the runners were dodging them. I was surprised to not see any weddings taking place, though that would make for a good ceremony shot – a pack of runners, lol.

I set out into a comfortable pace for the first mile, I didn’t want to start out too fast and exhaust myself so quickly. I was hit was a side stitch so mile two was a bitter slower that I was going for and by mile 3, it was just too hot I was ready for the run to be over with. For the last half mile or so I kept in line with two other runners and I tried to not let them get too far ahead of me. 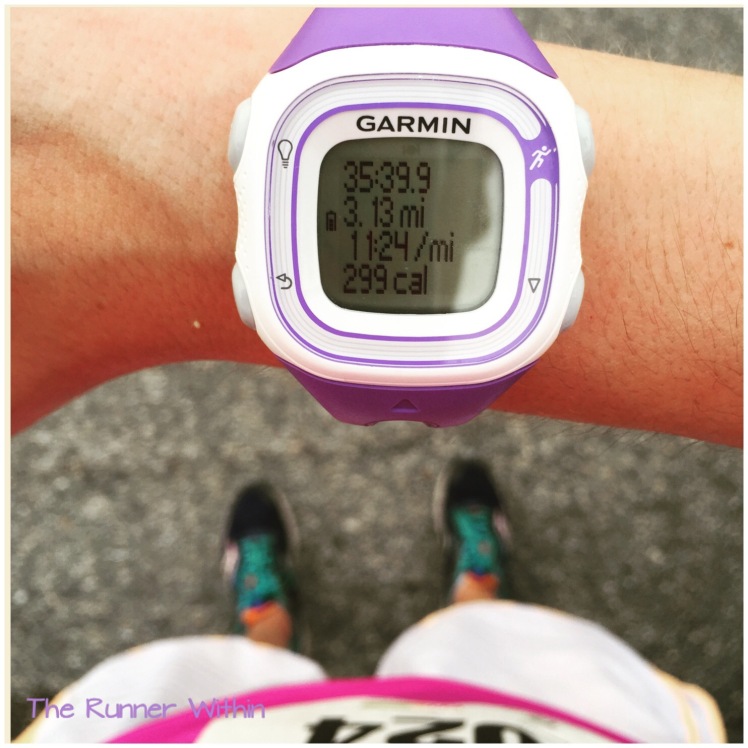 My watch time was 35:39. Given the weather conditions I will gladly take the time, and my average pace per mile was under 11:30 which is I had aimed to keep under. I met up with Barbara and where we went in search of some cold water and food. Since the line wasn’t too long for the hot food we headed over there. The race was sponsored by the Hurricane restaurant and the food they provided was good. I opted for a bean salad and some rice and black beans. I had to meet my best friend afterwards for some of her wedding duties so I wasn’t going to be having dinner anytime soon. The food the Hurricane provided was perfect to hold me over.

Since I was on a time schedule to meet my best friend, I couldn’t stick around to see if I won an age group placement or any of the raffles. Curiosity got the best of me so when they finally posted the results on Sunday I had to check: 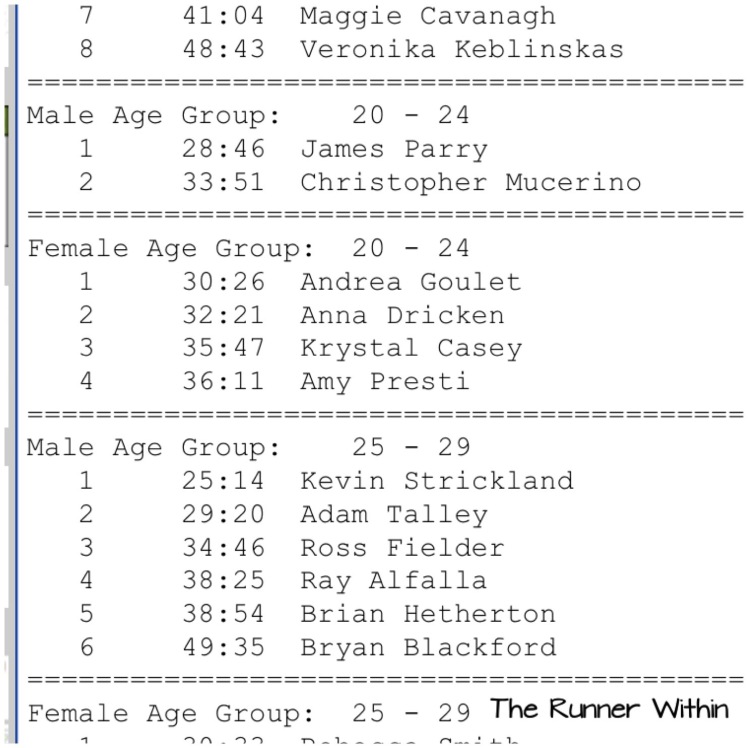 I did it! I placed in the top three! Even though I missed the first race, I am really happy with my participation in this series – beating last years two times and placing in my age group twice! Now that I’ve paced second and third, I’ve got some serious training to do to place 1st sometime in the distant future 😉 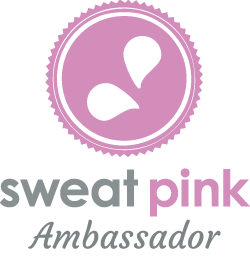