Run for the Fallen – Tampa is an annual event presented by the Tampa Area Marine Parents Association (T.A.M.P.A) to honor all the of the fallen Floridian servicemen and women. The run is a free, non-timed event to community and is held at the Veterans Memorial Park in Tampa. 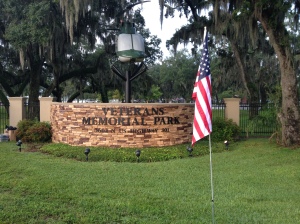 The association’s ultimate goal is to have enough participants each year to represent each fallen hero in the state of Florida. On the first year of this event seven years ago, participants and spectators totaled 230+. With the increasing publicity, last years event totaled 4,000+ participants and spectators. The goal this year was to surpass 5,000+. I felt compelled to run this race because I have family members who were active with the AirForce, United States Marine Corps and the Navy. To honor the fallen, rather than runner numbers of the bibs, the organization put the names, ranking and a picture of the fallen hero.

Prior to the run an opening ceremony commenced with the pledge, national anthem and a gun salute. A speech was also made by the event coordinator, something within that speech really stood out to me as a runner, “we do not have medals at our event, the medals hang on the brave men and women who sacrifice their lives for our freedom.” For me as a runner, I tend to run the race that offer a medal to rewarded myself for going the distance. It’s not too often I do a fun run just because, but hearing that verse made me all the more grateful I had chosen to partake in this event.

The race began about 9:30 am. The course took us out onto U.S. 301 out and back for a 5k, those participating in the 10k (me) had to do the loop again. With the later start, the temperature was increasing, and while I was not happy with how hot it was getting and why the race organizers would wait to start a race this late on a still hot September in Florida; I had to take a moment to step back and think of all the men and women overseas in the Middle East with their full uniform on, carrying a full sack on their backs in the hot weather conditions.

Overall this event was well organized with lots of volunteers to help make the event flow seamlessly. My only complaint would be their hydration stations, there was one stop along the course, and that stop did serve both sides of the road. Due to the 5k and 10k following the same course, my second lap around there was no water on my third pass by. However, when I came back by on my last leg of the run they were replenished with water bottles. I think it may been underestimated the ratio of water to runners.

Because it was a non-timed event, I do not have any official results. The course marker was slightly off but according to my Garmin I came in at 1:10:03. It was a great event and I hope I can make it out again next year!

4 thoughts on “Race Recap: Run for the Fallen – Tampa”