Originally I had no intention of running Best Damn Race Safety Harbor. Registration opened last year right when I started taking time off from running and as I progressed into Gasparilla training, race weekend lined up with my last back to back long run weekend and I knew I had to be smart with my training. As I progressed into training and more and more of my runner friends were registering. When Montana couldn’t make it to the St. Pete Beach Classic Duo Challenge she opted to register for this one, now who do’s going to keep me company on day 1 of the weekend’s 22-miler?? Knowing that having another “back to back” challenge race under my belt to prep me for the first day of Gasparilla would be all the more beneficial, I found myself accepting a bib transfer a fellow CG camper.

Montana and I arrived about 45 minutes before the start of the 10K and headed over to the Camp Gladiator tent where a group of us were participating in the 10K, my trainer the half. It was nice to be able to leave our stuff at the tent rather than go through bag check. Montana met up with some of her hometown friends who were running the half, on our way to the start chute.

The start chute was setup along a brick road in front of a resort spa with cars parked on one side of the road so it was a little tight. Shortly after the start is a small one lane bridge and because it was still dark out the only light we had came from the red and blue flashing lights atop the cop cruisers. You can imagine the congestion we faced trying to ease into mile 1. Montana and I ended up running on a stretch of grass trying to weave among people. We followed intervals Montana had set on her watch, which were :75/:30.

It wasn’t until about a mile and a quarter in did the congestion ease up and we had some room. The way the race course is set up you pass the start and finish area. The start is up around the corner from the finish and as Montana and I were passing by they had just kicked off the start of the half.

Shortly before mile 3 I saw my friend Kim from camp. By this point the sun had risen but was hidden behind what looked like rain clouds but there was no rain projected in the forecast that morning. Around mile 3.5 I took and extra walk break to take some fuel. Just after mile 5 did a Honda Passport pass us going the opposite direction. They literally were honking their horn to get runners going in the same direction out of their way – how the heck did they get on course? We were running on a main road with neighborhoods all around us. There were signs posted all week informing residents of this road race. Around mile 5.5 I saw my friend Marta from another CG location I occasionally go to. She was doing the challenge as well and we have each other the pep talk to get through this homestretch.

With Montana not far behind me I kicked into gear for the last little bit, crossing the finish at 1:05:33 – not a personal best for this distance or even this course but I was ok with that I went into this race not trying to earn a PR because of the extensive mileage I had to complete that weekend. I collected my medal and turned around to wait for Montana who came in about a minute after me. She achieved a new PR though!

We grab some water and met up with some of my other CG friends for some photo ops before heading back over to the CG tent. Though the sun was beginning to shine on through the clouds it had gotten a bit colder and windier. After collecting our jackets we headed over to the food tent to get some light fuel, I mean we did still have a 5K to run. They had an assortment of brown bites, cookies, these delicious guava bars from Pollo Tropical, orange slices and bananas. I was excited that they had Jimmy Johns, I was not please by the fact that all of their sandwiches had mayo on them, so I passed on the sandwich. We kept the legs warm by moving around as much as we could. The vendors were nothing to ride home about really, Iron Girl was there, along with Milestone’s jewelry. Tijuana Flats was there giving out free chips and salsa and FitLife foods had some of their samples. Plus I was able to pick up some new headbands from Indohypsie, she just came out with a new one with “Better Together” on it, our motto at CG, so naturally I had to snag one!

After catching up with even more familiar faces it was time to peel of the jackets and head back over to the start line for the 5K! 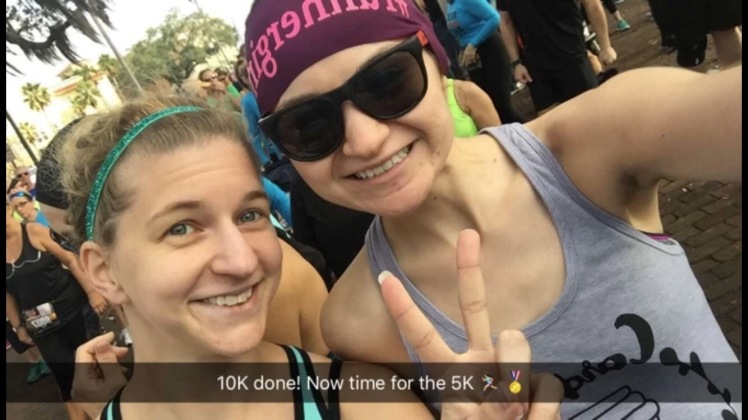 The 5K was just as crowded, and mostly likely more crowded than the 10K. Montana and I were able to make our way in deeper in the crowd, closer to the start line than we were able to for the 5K. Soon enough we were on our way! If there is one thing than annoys me more about the race is the number of walkers who start at the very beginning of the pack. I will be the last to judge you for walking a 5K, heck I walk with intervals when I am running. However when it comes to a race and there’s waves of runners who have to navigate around you, please be courteous and start a little more towards the back, it’s common race etiquette 🙂

I was feeling a bit more in groove for the 5K, there was still lots of weaving to be done for the first mile. The 5K course follows the same route as the 10K, except it take you a bit further north on Philippe Parkway to line it up perfectly to make the turn onto Veterans Memorial Lane for your .1 to the finish. As we settled into mile 2 I was feeling great, better than I was for the 10K, before I knew it I picked up the pace with Montana not to far behind me. One thing I’ve learned to do with racing, and even running in general, is not look down at my watch at every mile. I tend to syke myself out for running to fast or two slow, so instead I just let my watch do it’s own thing and run by feel. I knew I was picking up the pace progressively. I was still using intervals but the legs weren’t feeling heavy and the breathing was under control. With roughly a half mile left I felt a side stitch coming on in my left side. I slowed my pace down and tried to run through it, pretty soon the spectators were in sight and the pain subsided. I made the left onto Veterans Memorial Lane and dug deep for those sprints, crossing the finish in 31:29, with a new :33 PR!

This race continues to be a favorite of mine, and gets better year over year which deems it THE BEST DAMN RACE. Though it is exactly a month and one day after Disney next year, I hope to make it out for another 10K with my CG crew!